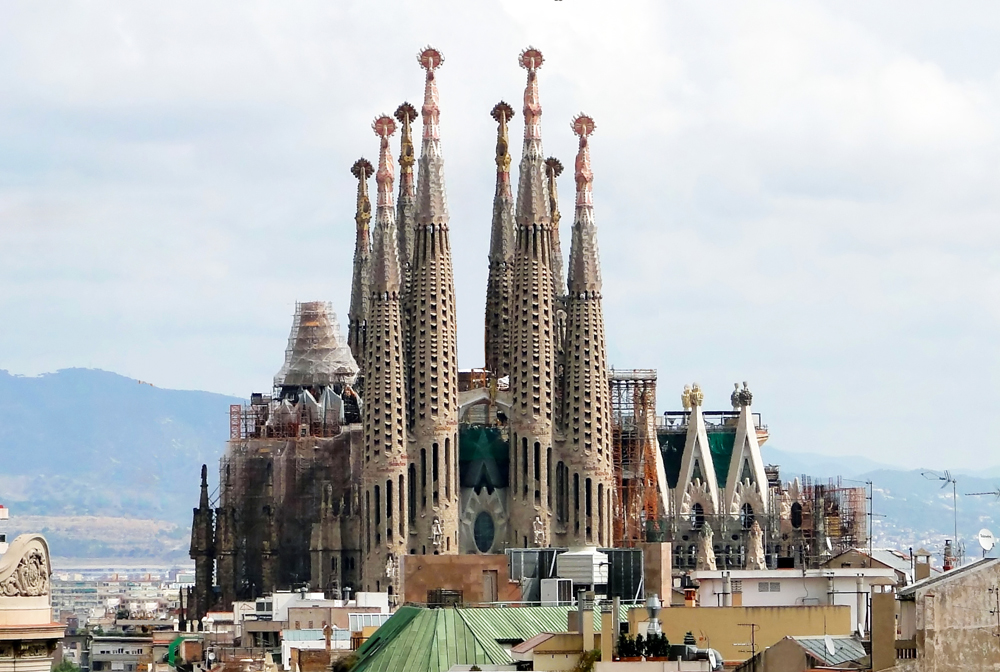 The Sagrada Família is a grand church in the centre of Barcelona. It’s an amazing experience to visit this huge construction site and see the work in progress, significantly enhanced by taking a lift and winding staircases to the top of one of the eight towers.

I visited in 2002 and there was a great view from the top – of both the construction site and surrounding areas in Barcelona. When finished, the church will have 18 towers -12 dedicated to the apostles, 4 to the evangelists, one to Jesus and another to Mary. 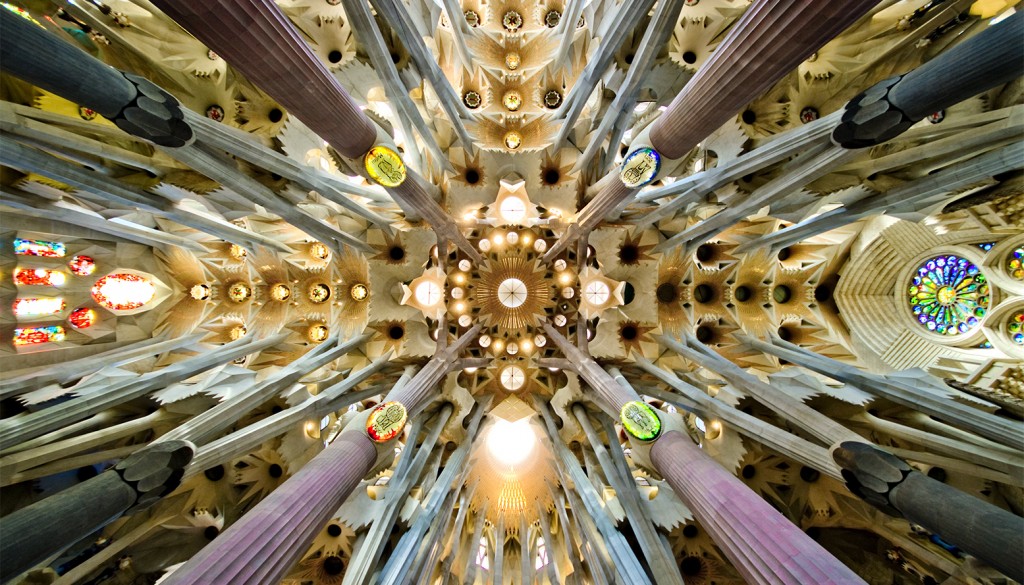 This is the crossing and dome of the Sagrada Família basilica, Barcelona, Catalonia.

The expiatory church of La Sagrada Família is a work on a grand scale which was begun on 19 March 1882 from a project by the diocesan architect Francisco de Paula del Villar (1828-1901).

At the end of 1883 Gaudí was commissioned to carry on the works, a task which he did not abandon until his death in 1926. Since then different architects have continued the work after his original idea.

It has always been an expiatory church, which means that since the outset, 131 years ago now, it has been built from donations. Gaudí himself said:

“The expiatory church of La Sagrada Família is made by the people and is mirrored in them. It is a work that is in the hands of God and the will of the people.”

The building is still going on and could be finished some time in the first third of the 21st century.”

Workers on the towers of Gaudi’s Sagrada Familia church in Barcelona.

You can buy tickets online up to about three months in advance via the official website:  http://www.sagradafamilia.cat

Be sure to book the Basilica + Torres (church plus towers) ticket, you can then choose one of the two towers open to visitors and just need to nominate a morning/middle day/afternoon range to visit and time slot for the tower visit, offered in 15 minutes intervals based on availability.

These were the conditions as at 17 October 2013 for Climbing the Towers:

• You can visit either the towers of the Nativity Façade (55 m height) or those of the Passion Façade (75 m height).
• The climb is by lift and descent on foot. The height is the equivalent of a building of between 20 and 25 storeys, almost 400 steps. The stairways are spiral and narrow.
• The visit to the towers is made in the time period reserved, which appears at the entrance. Not turning up at the selected time will meaning losing the right to the visit.
• The towers will remain closed for reasons of safety, when the weather conditions are adverse due to rain or wind.
• For safety reasons, wheelchairs, prams, elderly people with reduced mobility, pregnant women or people with vertigo, anaemia, a tendency to faint, claustrophobia, heart problems, respiratory problems, etc. cannot climb the towers.
• Children aged under 6 cannot visit the towers and until the age of 14 must be accompanied by an adult.