Enjoy your view from the top

I shared my story with the Huffington Post this week…

Just last year, I was proud to be at the top of the corporate ladder, a female CEO. Yet I’m prouder now to say I’m the inventor of Views On Top, an iPhone app that helps people find places with great views in scenic destinations around the world.

Investing my time, energy and money into creating a legacy that shares my passion for travel with others has been the most fulfilling role in my career to date. And I hope by telling the story of my journey, that I may inspire others to take a fresh look at what they’re doing with their lives too.

An early love of travel supported by a traditional career

Many years ago when I finished school in Sydney, my parents made it clear I’d need a job if I wanted to go to university. It was a hard slog studying and working and at 24 when I’d qualified as a chartered accountant, I achieved my goal of transferring to London to work. I’d already developed a love of traveling on a short European backpacking trip and over the next three years, used whatever time I could find to travel some more. Being the 1980s, guide books didn’t have pictures and the best way to get a feel for a place was to find a high vantage point to see the view. So seeking lookouts with views became a habit whenever I traveled.

Returning to Sydney in 1988, my energies were invested in full-time work, marrying, renovating a house and a few years later, raising two children. The years passed by with no time to travel so when offered the opportunity to work in London in 1999, I jumped at the chance. The work involved long hours but my family and I still found time for trips away and my son proudly proclaimed he’d been to 17 countries by the time he was 7. Our journey home in 2001 included a wonderful cruise across the Atlantic, arriving in New York to see the sun rising behind the World Trade Centre’s twin towers on September 9, 2001. 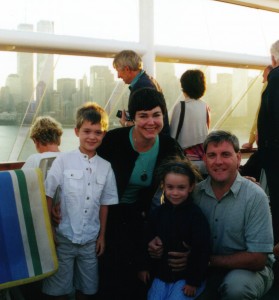 Back in Australia, work and family responsibilities meant that my love of travel again took a back seat. Then my marriage ended in 2008, and I undertook further studies that led to an executive role with a large healthcare group.

Working hard… but dreaming of travel

In 2011 I took my teenagers to visit their childhood friends in London and on a short trip to Europe. We sought out scenic views everywhere we travelled and it was on this trip that I was inspired to create a mobile phone app, to share my tips for finding scenic places and to make it easy to buy tickets in advance wherever you can. This picture shows the view from the top of the Notre Dam Cathedral in Paris, it’s well worth the climb despite a long wait in the queue… 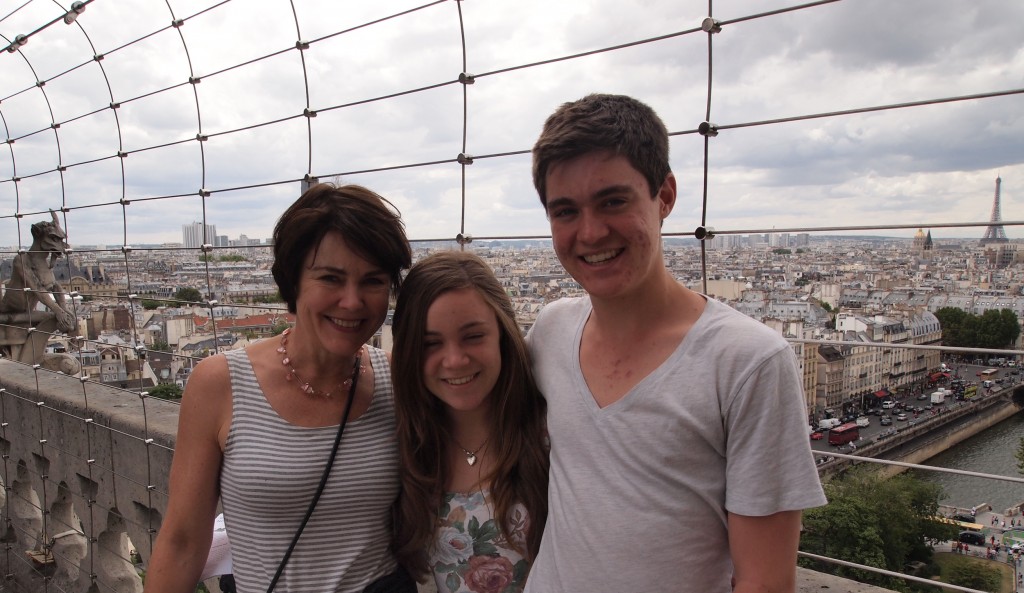 But as so often happens with a great idea on holidays, I returned to Australia and pushed it aside, thinking, “Who am I to develop an app?” The habit of working and looking after my children was too ingrained. When soon after I was invited to become the CEO of an accounting firm, I threw myself into the new responsibilities with a strong sense of loyalty to the firm, it’s staff and my family. But not so much for myself.

Then in 2012, I was invited with a group of Australian women CEOs to Dell’s Women’s Entrepreneur Network (DWEN) conference in India. Impressed by the stories of successful women from all over the world, I was reminded that 35 years earlier, “No one ever told me I could be an entrepreneur!” And so, the thought was seeded, “Maybe one day, I too could do something I love!” 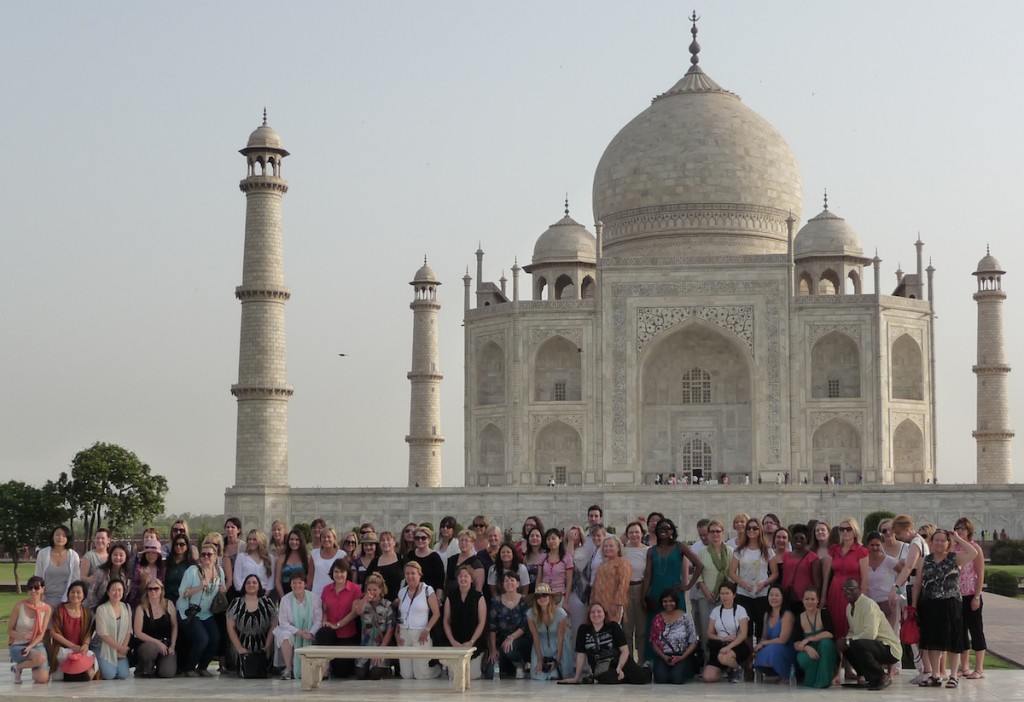 (in this photo I’m in the pink shirt, behind the bench)

When my firm merged with another in 2013, I took a leap of faith to create Views On Top. I’d already started gathering data on the observation decks at the tallest buildings and towers around the world and had found a developer that could build the app, but making it a reality only began when I gave myself permission to invest in me!

Finally investing in me. My project. My passion.

The next seven months were intense: researching data on over 700 destinations in 400 locations across 85 countries, designing and testing the app, setting up a website and social media, recruiting people… all the things a big business has a team of people to do but an entrepreneur has to manage on her own.

Views On Top launched in May 2014 to some great press, being described as the “child of Instagram and TripAdvisor” and “one of 20 essential travel apps”. It’s wonderful to now share stories and experiences of scenic views with people I meet and to see their joy as they explore the app and find places they didn’t know existed. And it was fun using my app to find places with views on a trip to the US and Canada enroute to DWEN’s June 2014 Austin conference, this time proud to be invited as an entrepreneur… not as the CEO of someone else’s business.

Along with indulging my passion for travel, I’m also glad I gave myself permission to spend time with my daughter in her final year at school. My message to her … and to anyone … is to seize the moment and do the things you love while you can. You could say it’s taken me a long time to work this out, but better late than never!

Enjoy the views from the top while you can

A significant event in my life emphasizes this point. On the night of September 10, 2001, my husband and I dined at the Windows on the World restaurant at the top of the World Trade Centre in New York. The view from this restaurant was outstanding. 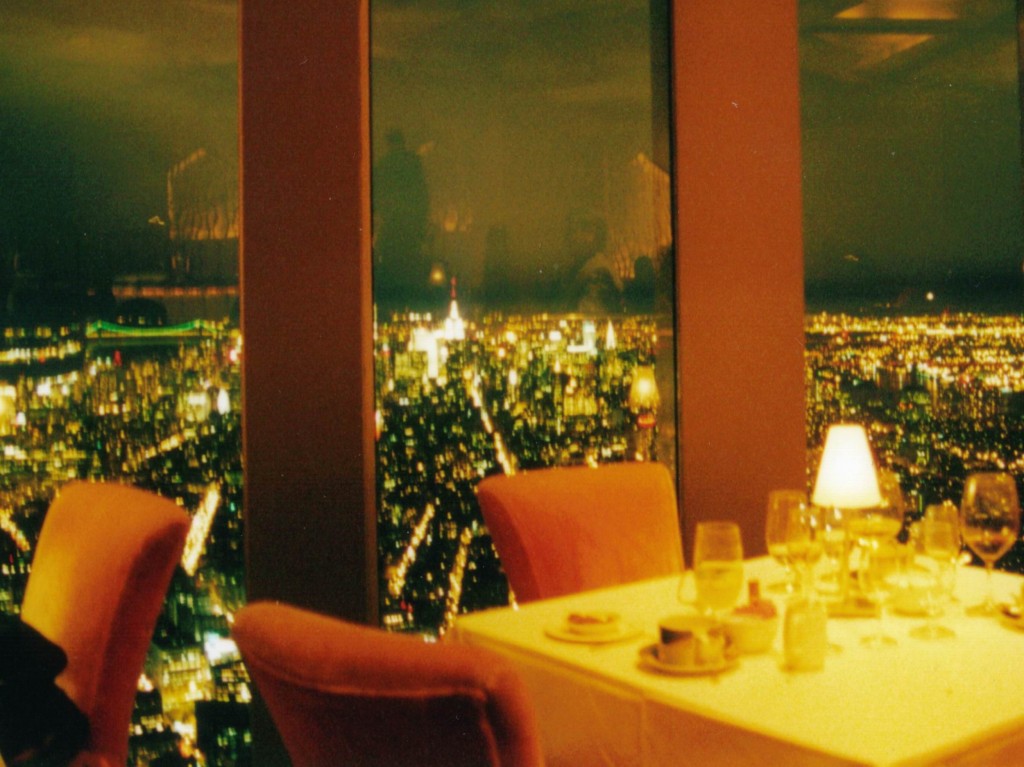 The very next day, we watched in horror as those iconic buildings were destroyed; our souvenirs of being among the last diners seem incredulous. With this memory in mind, I asked the Top of The Rock Observation Deck at the Rockefeller Centre for permission to use their beautiful view as the main image in Views On Top, with the Freedom Tower gleaming proudly in the background reminding us just how lucky we are and to enjoy life every day.

As Arianna Huffington predicts in Thrive, creating Views On Top has allowed me to find my place to stand, to remake my world in my own image, and to live my life with more joy and love. My advice to anyone wondering if they’re on the right path is to ask yourself: “What would it take for me to do something that I love?” And I’d say to them, “Grab onto your dream. Do it while you can and just make it happen.”

We have one just life. Why not experience it from your own top view?

Margaret Scott has developed Views On Top, a free iPhone app that makes it easy to find places with great views when you travel and to share recommendations for scenic destinations with others. Views On Top can be downloaded for free from the iPhone AppStore or via www.viewsontop.com

Margaret is a Fellow of the Institute of Chartered Accountants in Australia, holds a Graduate Diploma in Applied Corporate Governance from the Governance Institute of Australia and is a Senior Fellow of the Financial Services Institute of Australasia (FINSIA), with a Graduate Diploma of Financial Planning. She also holds a Bachelor of Economics from Macquarie University and is a Member of the Australian Institute of Company Directors. Before developing Views On Top, Margaret’s career included roles as a CEO, Director of Risk Management and Company Secretary, and Associate Director with Coopers & Lybrand (now PricewaterhouseCoopers).