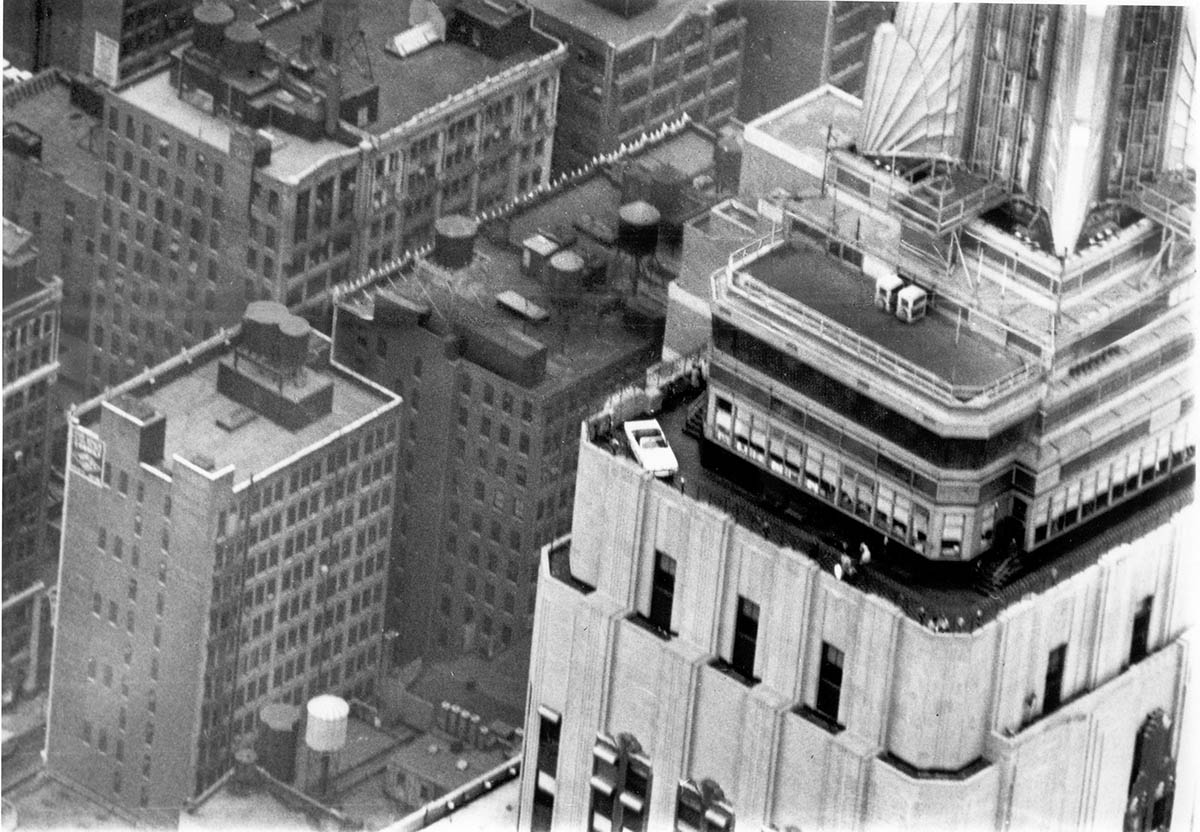 Two of the world’s most recognisable icons are coming together today, as the all-new 2015 Ford Mustang convertible goes on display on the observation deck of the Empire State Building in New York.

The display – replicating the same feat from nearly 50 years ago – coincides with the global celebration of 50 years since Mustang debuted at the 1964 World’s Fair in New York. 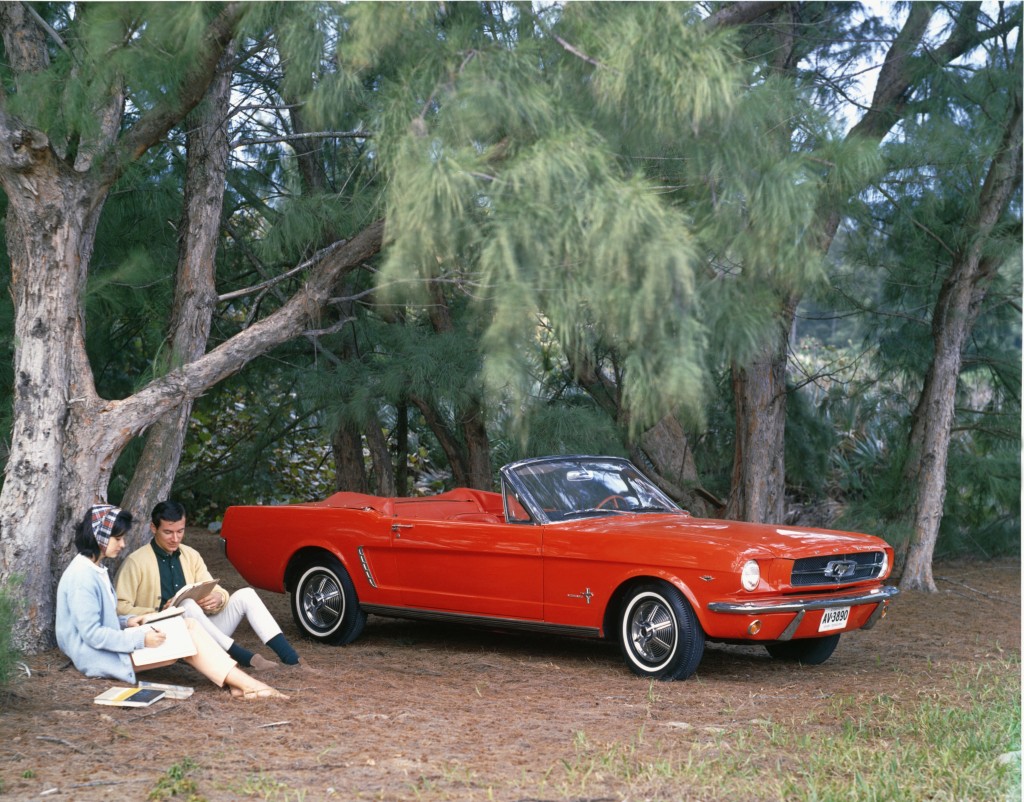 “New York is one of the greatest cities in the world, and it’s the place where the Ford Mustang story began 50 years ago,” said Mark Fields, Ford chief operating officer.

Taking a car 86 stories above the densely populated streets of Midtown Manhattan is no mean feat.

No portable crane can reach the 86th floor observatory, and the spire towering above the relatively narrow deck makes helicopter delivery impossible. That leaves the elevators as the only viable option. 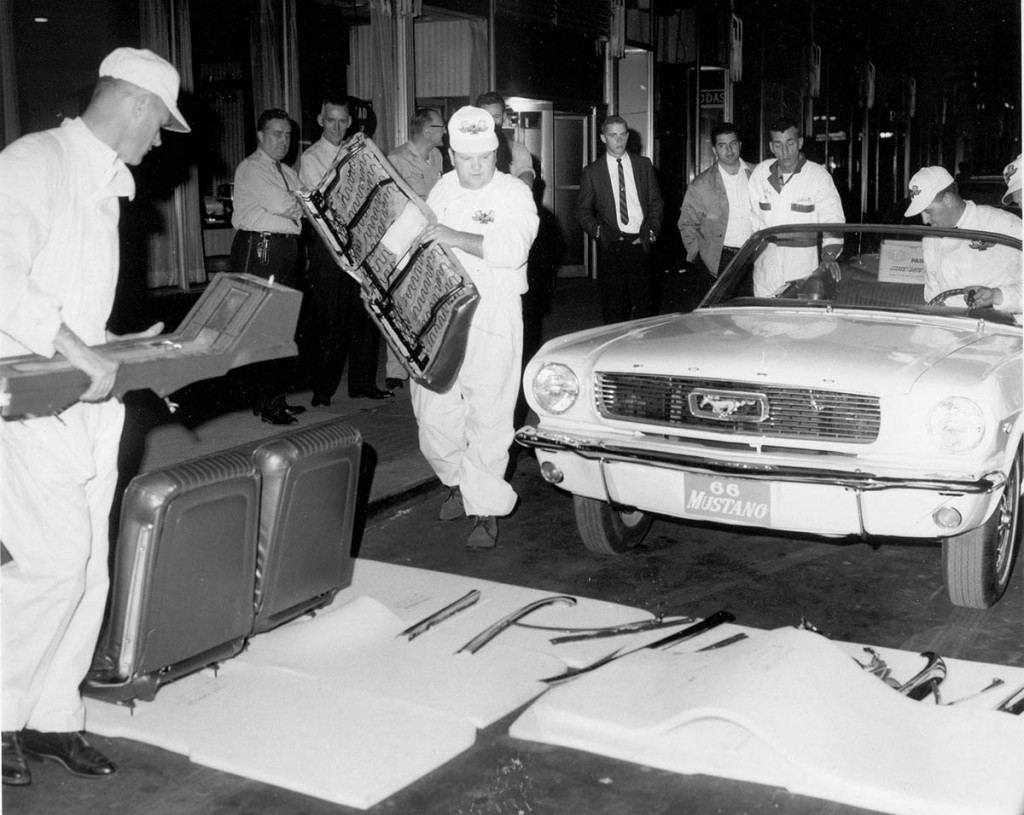 When the Empire State Building opened in 1931 as the world’s then-tallest building – a title it held for nearly 40 years – no one would have envisioned trying to transport a car up in the original elevators. 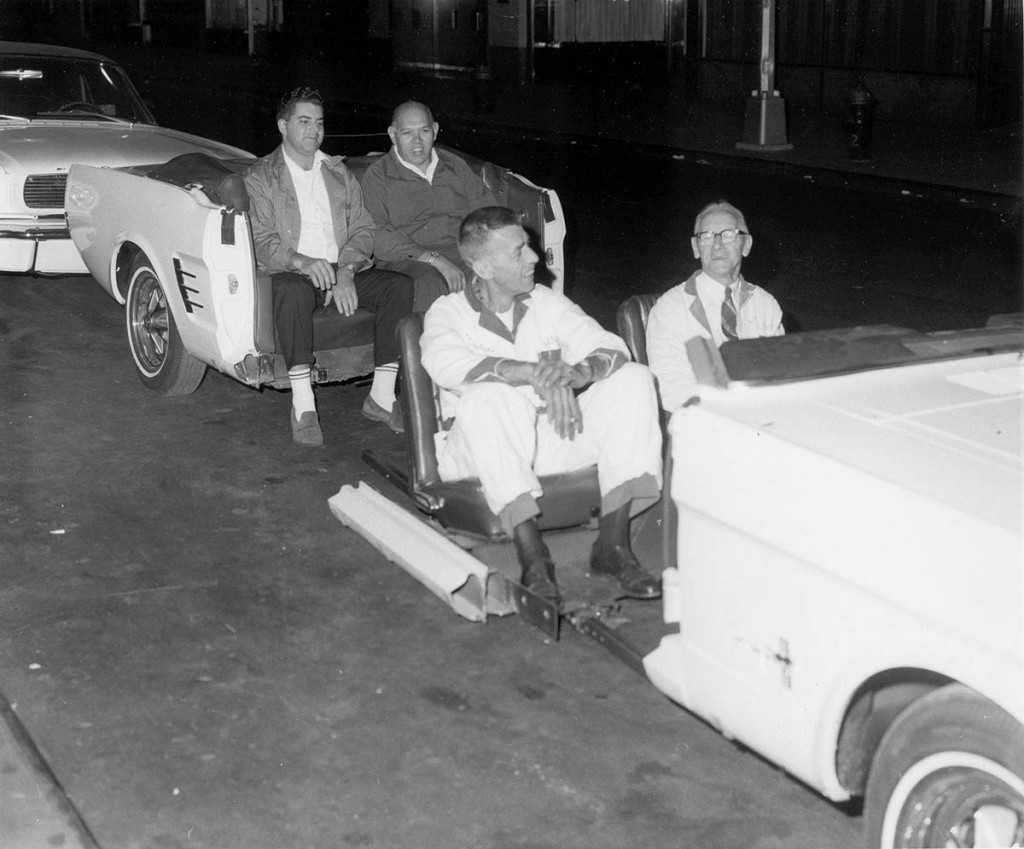 But in 1965, a prototype Mustang convertible was sliced into three main sections plus windshield so that the sections would fit into those elevators. 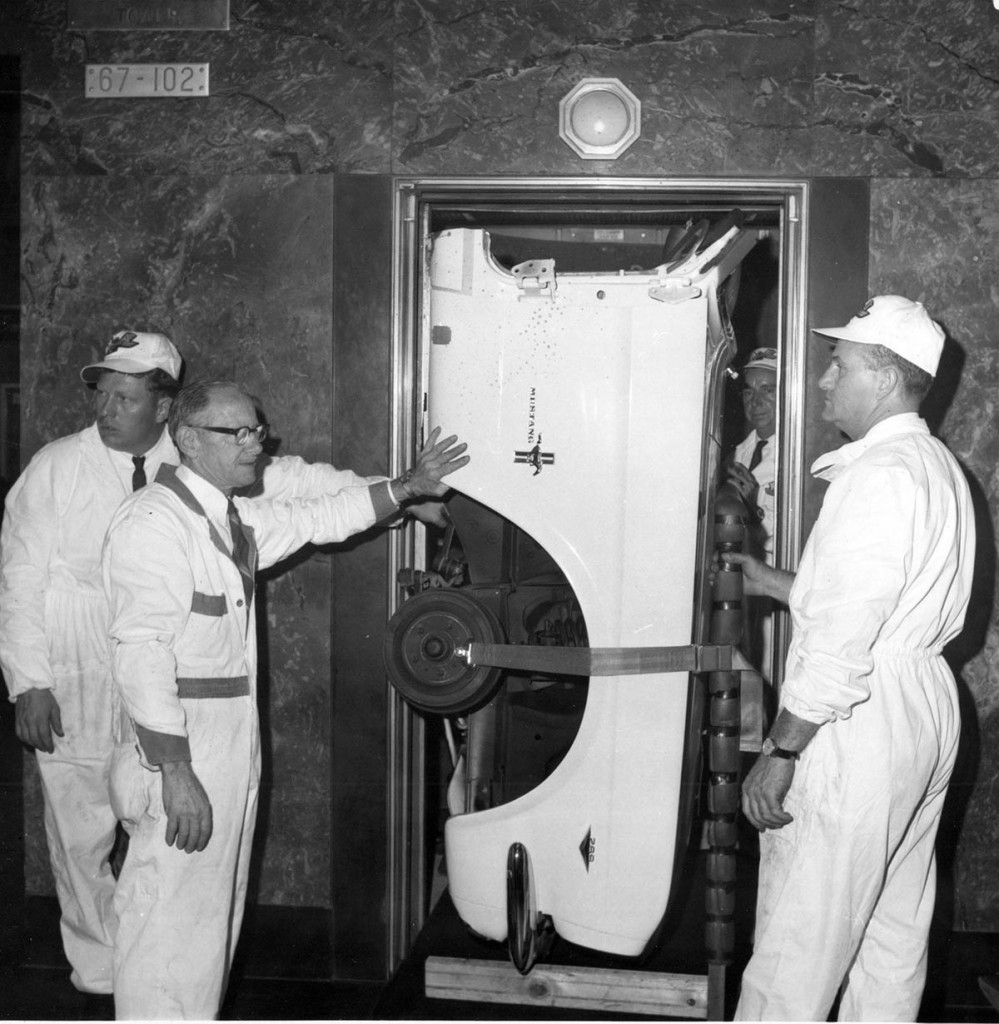 “Like all good craftsmen, our team is measuring twice and cutting once to make sure we can get this Mustang up in the elevators,” said Dave Pericak, Mustang chief engineer.

The 2015 Mustang is nearly seven inches longer and four inches wider than its ancestor, making the task of transporting it up even more challenging. Working from computer engineering data, team members preparing the display car have found just the right places to make the cuts so everything can be loaded onto custom-made racks that can be rolled into the elevators. 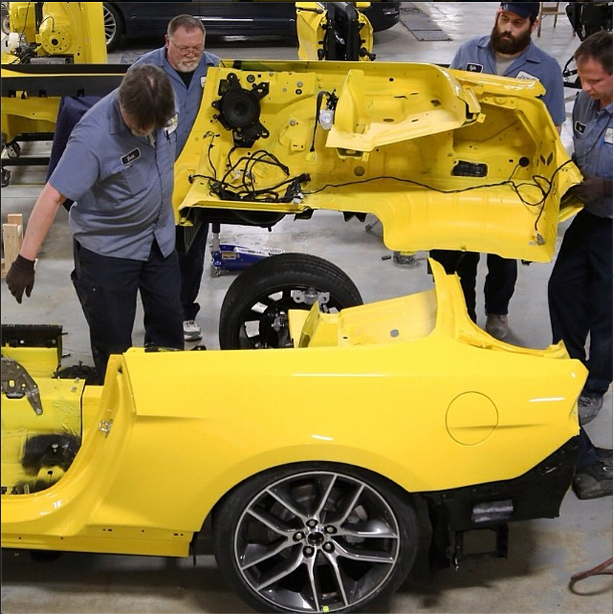 “It is a privilege to celebrate the new Ford Mustang, to bring together our two iconic brands, and to make new history with Ford,” said Empire State Realty Trust Chairman, President and CEO Anthony E. Malkin.

Visitors to the Empire State Building observation deck can see the new Mustang convertible for 54 hours from 8am to 2am April 16-17.

Ford Mustang was revealed to the world with a television advertising campaign on the evening of April 16, 1964, before being shown to the public at the New York World’s Fair on April 17. The car officially went on sale that day, and Ford dealers accumulated a record 22,000 sales and orders that first day on the way to more than 418,000 sales in the first year and 1 million sales in less than two years.Over the past five decades, more than 9 million Mustangs have been sold. 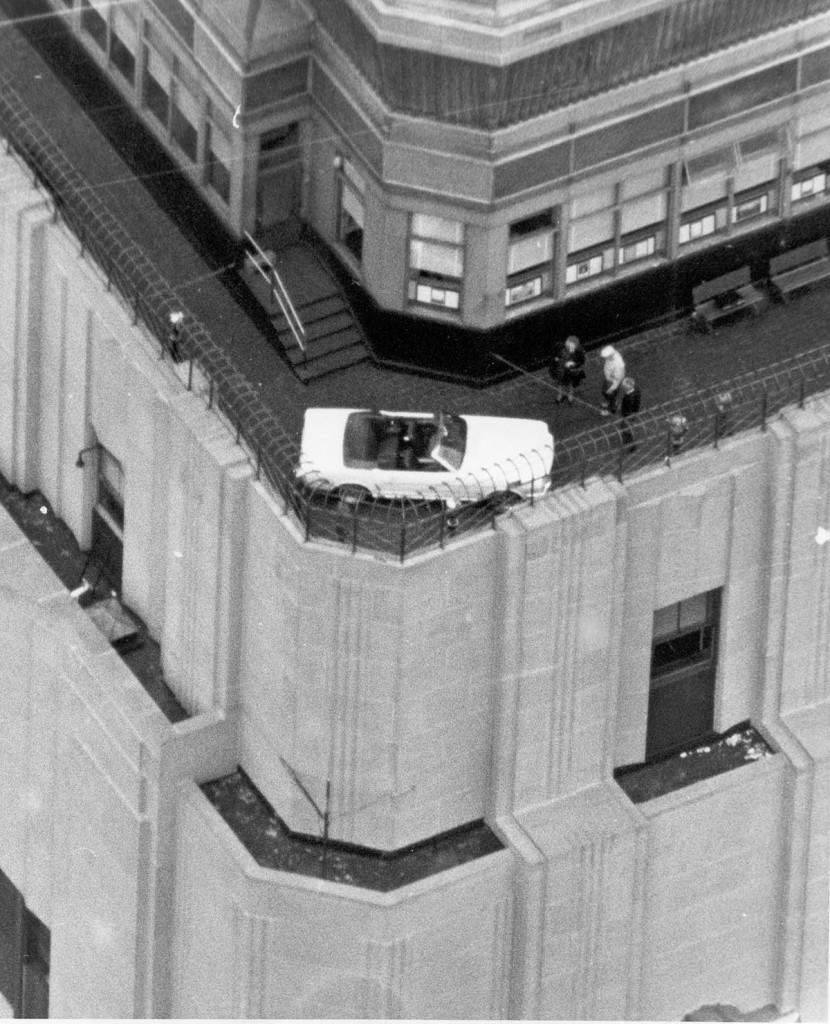